How We Came to Believe That Life Begins at Conception 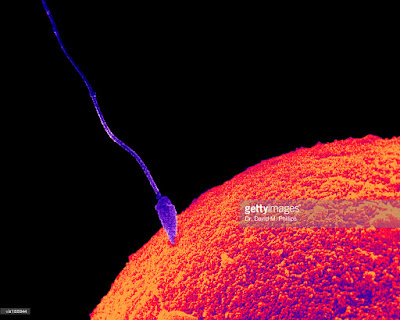 The belief that life begins at conception is at the heart of the pro-life cause. But I'm amazed that virtually nobody has asked themselves how we came to believe in it. It's rather taken for granted.

Many people assume that the origin of the belief lies in the dogmas of the Incarnation and the Immaculate Conception. While these dogmas reinforced the belief in the value of pre-natal life, they were never reference points for natural philosophy or science.

In the Middle Ages, the dominant model of embryology was Aristotelian, and it was embraced by St. Thomas Aquinas. It was the best science of the day. It was believed that male semen mixes with female menstrual blood to form an embryo. At first the embryo has a vegetative soul, then an animal soul then a rational soul, i.e. become a human being. Animation-- that is, the infusion of a rational soul-- was to occur at approximately 40 days for a male and 80 days in a female. The reason for this had to do with the formation of genitals. If the embryo was a boy, his genitalia would be obvious at about 40 days, but if no male genitals showed by 80 days, then it was sure it was a female.

This model was virtually unquestioned by the educated classes. The only dissenting voice to this model would be Galen, who believed that because women had ovaries-- which were known as female testicles-- it was only natural to conclude that women contributed to the formation of an embryo: otherwise what were those organs for? The medically informed tended to agree with him. However, Aristotle's model was largely accepted, especially as regards the timing for animation, which was important for the assessment of the gravity of abortion. Killing an unanimated embryo was not considered as serious as killing an animated one.

In the Early Modern Period, natural philosophers-- what we would call scientists-- began to question the idea of accepting Aristotle's scientific conclusions at face value. They didn't reject Aristotle per se, but they developed the mental habit of investigating natural phenomena and accepting the empirical truth even when it contradicted Aristotle. The Reformation also contributed to the development of science because Protestant natural philosophers felt free to reject Aristotle whose system was intertwined with Catholic belief.

The questioning Aristotle and predominant Catholic belief led to a change in embryological thinking. According to Wolfgang Muller, in 1603, Johannes Harpprecht, professor of law at the University of Tubingen, suggested that animation occurred at insemination. Harpprecht based himself on traducianism-- which was a heresy in the Catholic Faith. As a Lutheran he felt free to re-examine models which had previously been rejected before the Catholic Reformation. He believed that the immediate infusion of a human soul was the only logical explanation of human development. A vegetative soul and an animal soul could not lead to a human organism.

As far as I know, this is the earliest example of an affirmation of life beginning at a point close to conception. It wasn't exactly conception, but he affirmed that animation began at a point that stood at the very beginning of the biological process that created life.

Thomas Fienus, a Catholic Flemish physician who investigated embryological development, in a similar vein, affirmed in his book De formatrice foetu liber (1620)  that animation occurred three days after insemination at the latest. He also believed that it would be simpler to assume that infusion occurred soon because if a human being was to organize itself, it would naturally need a human soul.

Danniel Sennert, a Lutheran doctor, writing in 1621, inspired by traducianism, effectively says that the soul exists in the semen (More info here.) . His attitude towards Fienus seems to be: if only he weren't Catholic maybe he wouldn't be afraid to consider traducianism.

Throughout the 17th century, the thrust of embryological thought is a rejection of Aristotle's successive animation. There were also attempts at invoking atomism. For instance. in 1640's and 1650's Nathaniel Highmore and Kenelm Digby believed that various kinds of atoms throughout the body affect reproduction. Atomism could help explain why certain traits were passed on from one generation to another. Unfortunately, their views would not become popular.

The greatest discovery of the mid 17th century was William Harvey's conclusion that everything comes from an egg: Ex ovo omnia. The suggestion that mammals come from an egg was quite revolutionary and bona fide advance in embryological research.

Although the dissection of animals and human cadavres -- especially pregnant criminals and prostitutes-- helped research, the biggest advances in the 17th century came from the use of magnifying glasses and especially the microscope. Jan Swammerdam was an entomologist who proved that the four stages of insect existence-- egg, larva, pupa, adult-- were effectively the same species in 1669. As embryologists operated by applying analogies from one species to another, the idea that a less developed form was the same as a more developed form because well ensconced in science.

Swammerdam is also remembered as a founder of pre-formationism-- the belief that embryos exist pre-formed and are essentially activated by conception. He claimed to have seen adult structures in larval silkworms, suggesting that embryos pre-existed. Marcello Malpighi performed research on embryonic chicks in the 1670s, and using a microscope, he believed to have seen an embryo 12 hours after conception, contributing to the belief that embryos were pre-existing.

Adding to all this, is the findings of Theodor Kerckring, in 1672, who dissected a woman carrying an embryo he believed to be a few days old. He said that it was a well-formed embryo, and this reinforced the growing impression that embryos existed before conception.

Because microscopes were not powerful enough yet, there was no way to confirm these findings, but they were widely accepted to be true. These biological errors became the basis for ovist preformationism-- the idea that the embryo pre-existed in the ovum. For the next century, ovist preformationism became the dominant model of embryological development.

At the same time, Antoni van Leeuwenhoek invented the microscope in the 1670s and discovered spermatazoa that he called "animalcules". His discovery led to the theory of spermatist pre-formation-- that the embryo pre-existed in sperm. This model was less prevalent but still considered a serious contender. For the next several decades, scientists would debate which model was correct.

Meanwhile, the epigenetic model-- which did not completely die out in scientific circles-- was definitely considered rather passé.

Fast forward to about 1759. Caspar Wolff writes a medical dissertation, one so controversial, that he can't get a job after graduation. He revives the epigenetic view of generation-- that both male and female material are involved in the creation of a new embryo.  His research focuses on germ layers, focusing first on plants, then animals. He did not see pre-existing embryos, he saw undifferentiated biological material organizing itself into organisms. At first he had trouble being taken seriously, but eventually his ideas would prevail.

Preformationism was virtually eliminated as a serious scientific theory by about the early 19th century. The next big leap in the study of embryology was the discovery of cell theory by Matthew Schleiden and Theodor Schwann. They concluded that cells are the basic unity of life in 1839. In 1855, Rudolf Virchow further advanced cell theory by positing that all cells come from other cells, thus eliminating the need of a "life force" to explain the physical beginnings of human life.

It would be too simple to reduce the notion of "life begins at conception" to one specific event. It was gradually over the course of the 19th century, through numerous scientific discoveries that it was confirmed that biological development begins with fertilization. For example, in 1842, Theodor Bischoff posited that a chemical interaction between ovum and semen resulted in fertilization. He could described the effect of semen on an ovum, but he believed that semen was like a chemical agent on the ovum. There were numerous episodes like that one, where a scientist came closer to the truth, but significantly erred on some point.

As the idea of fertilization as the beginning of life was repeatedly confirmed through various experiments and discoveries, in reaction to these new fact, abortion laws were passed around the world, and no longer did they make the distinction between "formed" and "unformed" babies-- all human life was considered equivalent. In 1869, Pope Pius IX removed the distinction between animated an unanimated fetuses, as there was no scientific evidence for it. It was always assumed that the beginning of biological life was the beginning of a human being.

In 1875, Oscar Hertwig observed the fusion of two sea urchin gametes, visually confirming what was already fairly certain in many minds.  But focusing solely on Hertwig and this event obscures the gradual nature of the development of this knowledge.

This knowledge was somewhat common among the educated, but there were still plenty of ignorance as to the details of embryological development. The idea that embryos were "formed" and "unformed" was still quite widespread. Early abortions, which could be done by consuming herbs or other substances, were described as "bringing on one's period" and was not associated with murder in the minds of many people.  But the later the pregnancy, the more people oppose abortion because they understood that there was a living being inside the womb. Some doctors felt the need to write books describing embryological development and denouncing abortion, because popular ignorance was so widespread.

Even as human life was understood to begin at conception, it did not mean that the unborn were conferred personhood, especially in the embryonic period. For example, a project dubbed "the egg hunt" conducted in 1938 by Doctors John Rock and Arthur Tremaine sought to obtain the earliest embryos possible involved encouraging patients scheduled for hysterectomies to have intercourse before the operation so that embryos could be extracted for their collection. It did not occur to devout Catholic John Rock that encouraging the creation of life that could not be brought to term was not ethical. Embryonic life may have been protected by law, but it was if the law was protecting the principle of life, and not actual people.

So in a nutshell, that is how we came to believe that human life begins at conception-- through a series of scientific development, which did not necessarily translate into an acceptance of personhood of the unborn. Human life was protected on principle by elites, but the masses were not always well informed as to the why's and wherefore of fetal development and the reason behind the criminalization of abortion. I believe that this explains to a large extent why it was relatively easy to legalize abortion: the consensus on the vaule of human life was weak, so that when Columbia law professor Glanville Williams suggested abortion law reform in famous lecture in 1959, his suggestion found a ready audience. It took less than 15 years to achieve his goal. There were also a lot of other factors that came in to play-- the growing relativism, the sexual revolution, etc. but without the widespread recognition of the unborn, it was doomed to fail, with or without those factors.