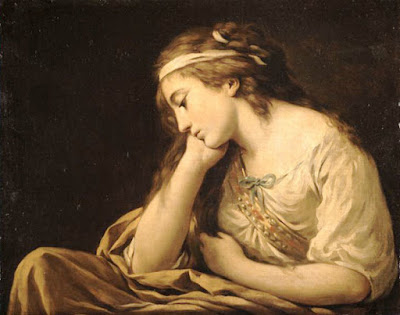 The following poem was published in the January 1740 issue of The Gentleman's Magazine in London. No author is listed.

* On a Child killed by procured Abortion, in order to hide the Mother's Shame who had been debauched. Supposed to be spoken by the Mother.


Thou! whose eyes were clos'd in death's pale night,
Ere fate reveal’d thee to my aching fight;
Ambiguous something, by no standard fix’d,
Frail span!  of nought, and of existence mix’d;
Embryo, imperfect as my tort’ring thought,
Sad outcast of existence and of nought;
Thou, who to guilty love first ow'st thy frame,
Whom guilty honour kills to hide its shame,
Dire offspring!  form'd by love's too pleasing pow'r!
Honour's dire victim in a luckless hour!
Soften the pangs that still revenge thy doom:
Nor, from the dark abyss of nature's womb,
Where back I cast thee, let revolving time
Call up past scenes to aggravate my crime.
Two adverse tyrants rul’d thy wayward fate,
Thyself a helpless victim to their hate;
Love, in spite of honour's dictates, gave thee breath;
Honour, in spite of love, pronounc'd thy death.

I have never come across an abortion-related poem written prior to the 20th century. What is doubly amazing is that is expresses abortion regret.

The first thing that I noticed about this poem is that it is addressed to a child killed by procured abortion. This suggests that at least some of the people outside of medical, legal and scientific circles knew that abortion killed a human being. That being said, the status of the embryo is quite ambiguous. Although a poem is dedicated to this child, he is said to be an “ambiguous something, by no standard fix’d,” a frail span “of nought and existence mix’d” , an imperfect being who  is a sad outcast out of “existence and of nought.” And yet, in spite of the ambiguous character of the embryo, the mother pleads to her child “to soften the pangs that still revenge thy doom.” Those pangs “call up past scenes to aggravate my crime.”  I sense a certain gothic sensibility. This mother is essentially asking for her dead child’s intercession in easing her pain. It’s vaguely Catholic and what is vaguely Catholic is often vaguely gothic.

So what we see here is a mix of recognition of  personhood of the fetus and of his nothingness, which to me sums up the embryo’s moral status in this present age, and I suspect it was much like this in the 1740’s. And what is also noteworthy is that the mother is portrayed as something of  a victim.

And note the biological inconsistency in the poem. The embryo is definitely considered alive, although imperfect, but he is said to have breath.  As you can imagine, the average person did not have a good grasp of fetal development.

Note that according to Joseph Dellapenna, in his Dispelling the Myth of Abortion History, abortion before the 19th century was rare. It was thought to be so dangerous that attempting it was tantamount to suicide. There were probably women who managed to terminate their pregnancy and live, but these women were not very numerous. Considering that cases of successful abortion were relatively rare in the 18th century, and that it was not a subject discussed in polite society, I don’t think this poem is primarily a critique of abortion (although it is that.) This poem seems to be a critique of 18th century ideas about love and honor. Forbidden love first created the embryo with its “too pleasing pow’r”. (So unfair!) But then shame forced her to have an abortion in the name of honour. Love and honour together are “two tyrants” and the embryo is a victim of their hate.  Ultimately then, it was these two tyrants who murdered the baby--  the overly strict code of morality and the code of honour.

I find it fascinating how this poem was written in 1740, yet its themes are very contemporary. The unborn child is both person and nothing, the mother is a victim, and social conservatism is essentially blamed for this outcome.  This poem tends to show that profound abortion regret is not the invention of our heavily politicized abortion debate, but has its roots in the recognition of the humanity of the unborn.